Packed with hitherto unpublished anecdotes that invite you behind the unforgettable emotions of agony and ecstasy of Jim McCalliog’s career.

Join Jim on his journey through seventeen eventful years that started on the backstreets of the uncompromising Glasgow district of the Gorbals. 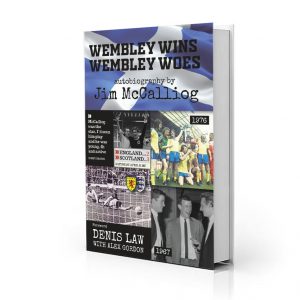 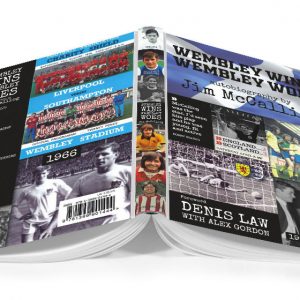 JIM McCALLIOG fired himself into the Scottish international football history books on the memorable and momentous Saturday afternoon of April 15 at Wembley in 1967.

The twenty-year-old Sheffield Wednesday midfielder was selected to play for his country at the highest level for the first time against World Cup holders England.

Scotland had been written off as no-hopers that day against a team that had lifted the global prize the previous year and had gone nineteen games without defeat. However, McCalliog, performing alongside his alltime favourite player Denis Law, had other ideas as he thumped in the winner beyond Gordon Banks as the visitors emerged triumphant on a 3-2 scoreline.

It was an extraordinary moment in the remarkable career of one of Scottish football’s favourite sons. But this is just one tale among so many. Jim’s long-awaited autobiography highlights the rollercoaster ride of a startling odyssey through the beautiful game. It is packed with hitherto unpublished anecdotes that invite you behind the unforgettable emotions of agony and ecstasy of two FA Cup Finals at the English football mecca, despair of defeat with Sheffield Wednesday in 1966 and the delight of victory with Southampton in 1976.

Jim discloses the real stories behind the headlines as he takes you on a journey through seventeen eventful years that started on the backstreets of the uncompromising Glasgow district of the Gorbals where a youngster realised playing football had become a vocation.

There are no reviews yet.

The right of Jim McCalliog to be identified as the Author of this work has been asserted by him in accordance with the Copyright, Designs and Patenets Act 1988.

All right reserved. No part of this publication may be reproduced, stored in a retrieval system, or transmitted in any form or by any means, electronic, mechanical, photocopying, recording or otherwise, without the prior written permission of the publishers.